About a year ago I made a career change from Accounting to Journalism. As I like to say, I moved from obsessing over numbers to obsessing over narratives. Why? Among many reasons, it was an opportunity to learn about an aspect of life I wasn’t too familiar with: storytelling.

Coming tops in the Global Peter Drucker Challenge twice in a row, definitely helped in convincing me that I had a thing with words but I think the turning point was in 2019.

I read a book about how the performance and valuation of companies rely on not just numbers but the stories attached to them. It was a bit of a wake-up call that I’ve been looking at only one side of the picture. In the past year as a journalist, I’ve learnt three lessons:

“The person who came first in class, does he/she have two heads?”

Most people who grew up in a Nigerian home are familiar with this question. It’s often asked by a parent to their children when comparing them with a person who’s doing better than the child in a particular aspect of life, usually school.

Since I now have a better sense of what it’s like to write stories, when I read other people’s, I’m a bit more attentive to what’s said, how it’s said, and what’s not said. After all the author doesn’t have two heads. I think about the incentives and biases behind the knowledge shared and the angles. In some cases when I see errors, it reminds me that humans are behind the articles too, and once in a while I shoot a DM to the writer.

For example, I think this profile of Amazon’s new CEO Andy Jassy has a negativity bias as it’s somewhat overly focused on finding faults.

I’ve been writing for a while before I became a journalist, so I’ve been pretty much familiar with the highs and lows of creating content. One moment you’re full of ideas and the next moment it all looks like crap, then you edit through the crap and eventually, it looks great and you’re wondering, why did I ever think this was crap? Sometimes, I think it’s still crap until someone else gives a compliment. While I’m aware that I’m still improving, I’ll take all the compliments I get along the way. 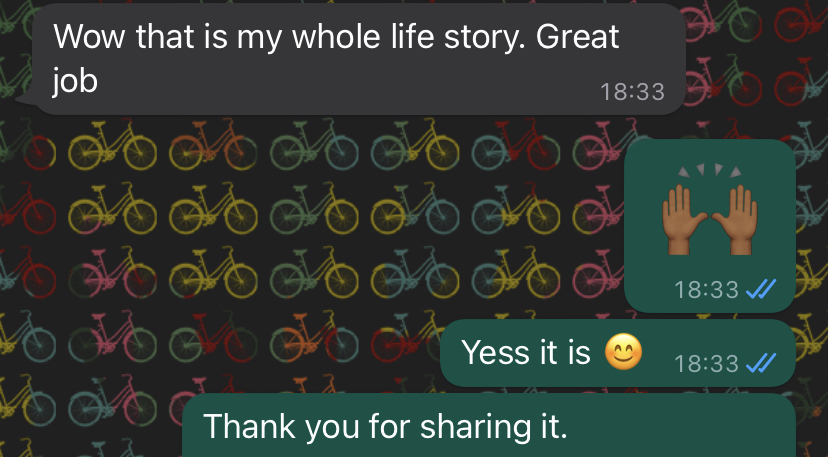 So every now and then, I try to reply to newsletters I’m subscribed to with words of encouragement or simple feedback.

It’s also made me appreciate the role of editors, most of the time the names of editors don’t show on articles but boy do they make the articles better! Writers contribute at best 80-90%.

Every time I come across someone/a company doing something great but isn’t telling the story well, I’m reminded of a paragraph from this brilliant piece by Morgan Housel.

“In a perfect world the importance of information wouldn’t rely on its author’s eloquence. But we live in a world where people are bored, impatient, emotional, and need complicated things distilled into easy-to-grasp scenes…Great ideas explained poorly can go nowhere while old or wrong ideas told compellingly can ignite a revolution. Morgan Freeman can narrate a grocery list and bring people to tears, while an inarticulate scientist might cure disease and go unnoticed.”

It’s a reminder of how important telling stories are and the intentionality that needs to be in place for people and companies to enlighten people about their projects. These days I try to take out time to explain how the company can tell a better story but it’s impossible to do that for everyone. I’m glad David Adeleke wrote this excellent piece that explains how the media space works for companies seeking some exposure.

In the coming year, I look forward to telling better stories—I now write more about Big Tech companies in Africa and Investigative stories—and talking to more people (as many as I can, so help me God!)

In the next section, I comment on some articles I had written at TechCabal. A little bit of behind the scenes.

Inside Kuda Bank’s playbook for banking every African

Kuda had just raised $10m and I decided to look under the hood of its intention to ‘bank every African on the planet.’

It was my first article and it sure did come with some drama. There was some pushback from Kuda about some things stated in the article and insults from an angry Kuda fan in the comments section–fortunately, someone else replied to her. This experience was a useful reminder that every word matters and has consequences. Fortunately, I was right and didn’t have to change anything, except adding a few hyperlinks to some statements.

The complaints about harassment on Bolt were getting too much and I wrote this article to answer questions I also had.

I decided to write about Opera News after reading Opera’s Q4 2020 earnings call transcript. It seemed like there was a lot of focus on Opay while Opera News was doing great. The article resonated with a lot of people based on comments on social media but some folks at Opera News weren’t too pleased with the title of the article.

Google’s Loon took off with a promising start; Here’s what went wrong

After writing a news announcement piece on the shutdown of Google’s project loon story, I decided to trace the story behind the demise of this project using secondary sources. I liked how it turned out because I just wanted to write in a bit more descriptive style and I believe I nailed it.

Here’s how Nigerian cryptocurrency exchanges are responding to CBN Ban

Sometimes you understand something but when you try to explain it to other people you find that you don’t have the right words to do so. That’s how I felt as I wrote this. In hindsight, I don’t know which was more difficult between writing the article and shooting the explainer video embedded in the article.

The video is only six minutes but it took about two hours to shoot. I blame it on poor preparation and external interference. At the end of the recording, I simply hoped that the video team would make something meaningful out of my blabbing. I’m glad they did 🙂

I wrote this to get a sense of how the edtech space fared, cutting through all the hype and noise. I was most surprised about EYouth’s performance, considering that I hadn’t thought much about the Egyptian tech ecosystem.

‘Where are the platforms you mentioned or it got lost in the middle?’

That’s the first comment at the end of the article. It makes me wonder whether I should have explicitly listed out the platforms, trading writing style for clarity. Or maybe it’s the reader who wasn’t patient enough.

Inspired by Alex’s FK’s piece I wanted to create something similar for Rinu. It was my first time interviewing someone who was hiding from the government, so we couldn’t meet physically and communication was a bit coded.

In general, writing this stretched me because it required a different writing style.  Looking forward to writing a couple more like this in 2022.

I was tired of reading articles that spoke about the losses Nigerian businesses faced without giving numerical examples. I guess the accountant in me just needed to see numbers.

The dawn of Ghana’s tech ecosystem: Here’s what you should know

Terrified. That’s how I felt about writing this article. It’s quite some huge responsibility to write a definitive article about a county’s tech ecosystem. I kept thinking to myself, ‘one mistake like this and the whole of Ghana will drag me 😫😂’

Fortunately, this didn’t happen as I went all out to ensure that I was accurate.

I remember receiving this message on a Saturday morning and asking myself, ‘which kind of story is this where nobody wants to talk to me.’ It had been a bit over a month and I still wasn’t making headway with the GTB story.

Fortunately, after much asking around I found someone who was willing to talk and corroborate the bits of info I’d gotten from other people. It took about 3 months to put this together.

Interestingly, I thought that was long until I tried writing another investigative piece and well, it’s been four months now and I still haven’t made significant headway with that story. Investigative stories have a way of showing you who’s boss.

This is easily the best human interest story I’ve written so far. I enjoyed having the conversation and writing it because Regina was very generous with sharing her life’s story.

Finding reputable subject experts to comment on a story is one of the regular struggles writers face. Thanks to my colleague Alex for hooking me up with all her contacts on this article because, for the first time in a long time, I realized I didn’t have contacts familiar with Chinese tech.

I have a love-hate relationship with the interview style of this column. I enjoy having conversations but dread the process of transcribing. Fortunately, work pays for Otter.ai, a transcription software but there’s a limit to how helpful it is depending on the accent of the person I’m interviewing.

Took my longest trip (~6 hours to and fro) yet, to find out what it’s like building a hardware startup in Nigeria. This was one of those occasions where I’d rather have done the interview virtually but knew I had to visit the site.

Terawork is fast becoming a home for African freelancers

I’ve never seen as much fan love about a product like this. I’d score easily my writing here average but the number of comments made the effort rewarding.

The Next Wave: Netflix’s long game in Africa

This was my first attempt at writing the next wave. I somewhat didn’t like the output for a long time, until one day I went back to read it and said, hey this article isn’t that bad.

A daily recount of my 2021 Ghana Trip

As much as I enjoyed writing about my daily experiences, it reminded me of when I used to journal and why I stopped: it’s demanding. It didn’t matter how I felt or how late I was out. I had to write about my day.

TechCabal Daily – Apple puts the under in ‘under the radar acquisition’

I like the Q & A style for the Apple acquisition story.

TechCabal Daily – It’s out there, alone

I’m not sure how the I, Robot movie analogy came to mind, but I knew I had been tossing and turning for long, looking for a segue for the rare story on drones.

I love this title, shout out to the editor Edwin for whipping it up because I had used up all my creativity. Sometimes, the title for the newsletter jumps out at me early on, and on some other days, inspiration is no where to be found.

Fun fact: I watched the South African documentary My Octopus Teacher between the time I came across the news of it winning awards and before the newsletter went out.

That’s all for now!

This site uses Akismet to reduce spam. Learn how your comment data is processed.